The A. Victor Thomas Environmental Stewardship Award, given annually by the Blue Ridge Land Conservancy, recognizes those who have made significant contributions to the preservation of the natural heritage of western Virginia. The award’s namesake, the late conservationist Vic Thomas, was a Roanoke native and a 30-year member of the House of Delegates. Among his achievements during his tenure in the General Assembly were the passage of a bill enabling the state to purchase the 8,500 acre Big Survey tract in Wythe County (championed by BRLC), as well as successfully spearheading the effort to include a hunting and fishing rights amendment in the state constitution.
​
The Vic Thomas Award is presented annually at BRLC’s fall Conservation Celebration benefit. A special committee of Land Trust board members and volunteers select the recipient. 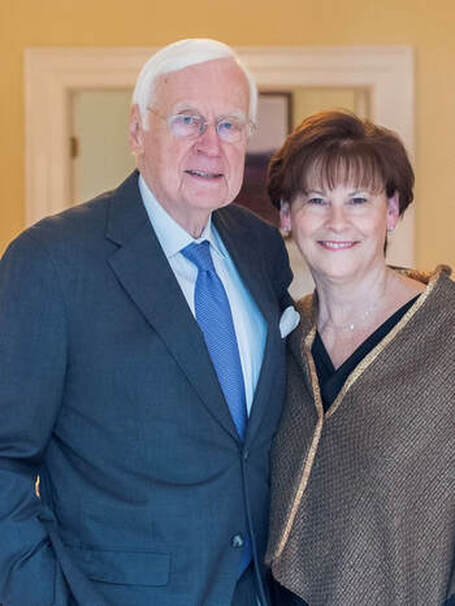 This year’s Vic Thomas Award recipient is the late Gov. Gerald Baliles and wife Robin. As you may know, Gov. Baliles was a native of southwest Virginia, hailing from the town of Stuart in Patrick County, and the last governor from the western half of the state. He was a champion of Virginia’s environment while in office. As governor, he worked with the General Assembly to create Virginia’s Natural Resources Secretariat.
As described in the Richmond Times-Dispatch last October by former Secretaries of Natural Resources, Democrat John W. Daniel II, and Lynchburg native and Republican L. Preston Bryant, Jr.,
​
“In the new secretariat, Baliles established a powerful political office that signaled to all Virginians that water and air quality mattered, that the Chesapeake Bay deserved the attention of government, that Virginia’s state parks warranted emphasis and expansion, and that our marine resources could be a calling card for recreation and economic expansion. Most importantly, Baliles signaled that both economic development and natural resources protection benefit when harmonized.”

​​
​​In the fall of 2019, shortly before his death, Gov. and Mrs. Baliles forever protected two beautiful family properties in Patrick County with the Blue Ridge Land Conservancy. We were honored and humbled to help the Baliles family conserve these places they love.