Music by Haze and Dacey 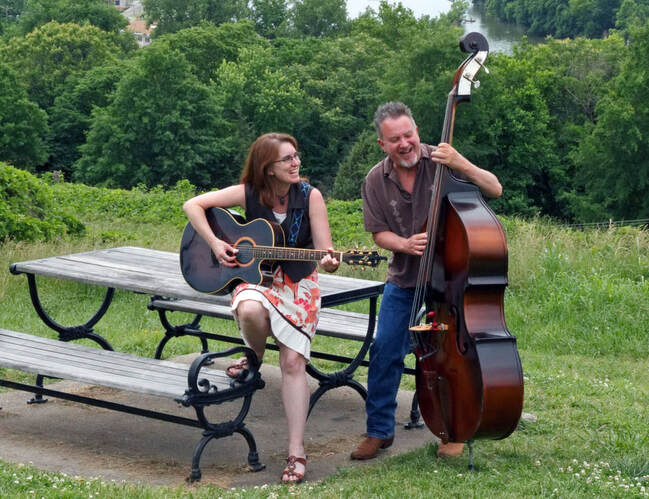 Image by Jolie Harrison https://hazyshadeproductions.com/epk
Based in Richmond, Virginia, Haze & Dacey revel in lilting melodies, tight harmonies, and compelling rhythms that make toes tap and bodies sway.  Original songs written by Haze are interspersed amongst covers both familiar and obscure.  The duo skips nimbly from folk-pop to alt-country to roots-rock, creating a homegrown organic sound with upright bass, acoustic guitar, piano, shaker, tambourine, and mouth-horn.
Haze & Dacey have been playing together as a duo since 2012. They combine their love of playing music with their love of travel, entertaining audiences at various breweries, wineries, and other venues throughout Virginia, and occasionally dipping down into North Carolina. They have had the pleasure of performing at several of Virginia's great state parks, including the "Music on the Cliffs" concert series at Westmoreland, the "Music in the Park" series at Hungry Mother, and the Caledon Art and Wine Festival. They have also ventured farther afield to appear at venues in Maine, New Hampshire, Vermont, Massachusetts, Connecticut, New York, and Pennsylvania. In 2016, the duo quietly released an all-original, 6-song EP, The Beaverdam Sessions.
In early 2019, Haze began writing songs inspired by The Handmaid's Tale, both the original novel by Margaret Atwood and the Hulu series of the same name. The pandemic delayed recording, but production of a full-length album is now underway at Sound of Music studio in Richmond, and Letters from Gilead is slated for release sometime in mid-2021. Additional musicians were recruited to fully realize Haze's vision for this collection of songs, and so The Haze & Dacey Collective was born.
MEMBERS: GENRES: folk-pop, roots-rock, alt-country, swing
INFLUENCES: Patty Griffin, Kathleen Edwards, Joni Mitchell, Tom Petty, Indigo Girls
WEBSITE: www.hazendacey.com
​